Being such a long stretched out country covering a variety of landscapes, Chile has a vast range of dishes to offer. While the highlights of Chilean dishes are fish and seafood, we to put a spotlight on the authentic and everyday Chilean food you will find across the country. We discovered and wrote about seafood found along the long Pacific Ocean coastline. In Santiago, at the famous Mercado Central, we experienced locos (abalone) and pastel de jaiba (crab pie).

Further north in the city of Valparaiso,  we fell in love with a colorful city and incredible Reinata fish, a local white fish specialty. The high quality Chilean wines are not to be missed. Maipo Valley, considered the ‘Bordeaux of South America’ has exceptional wines.  And Maule Valley, the largest and oldest wine region in the country, has several family-owned vineyards, offering small intimate tours.

This article, however, is dedicated to the everyday popular Chilean foods you will see as you explore the country. 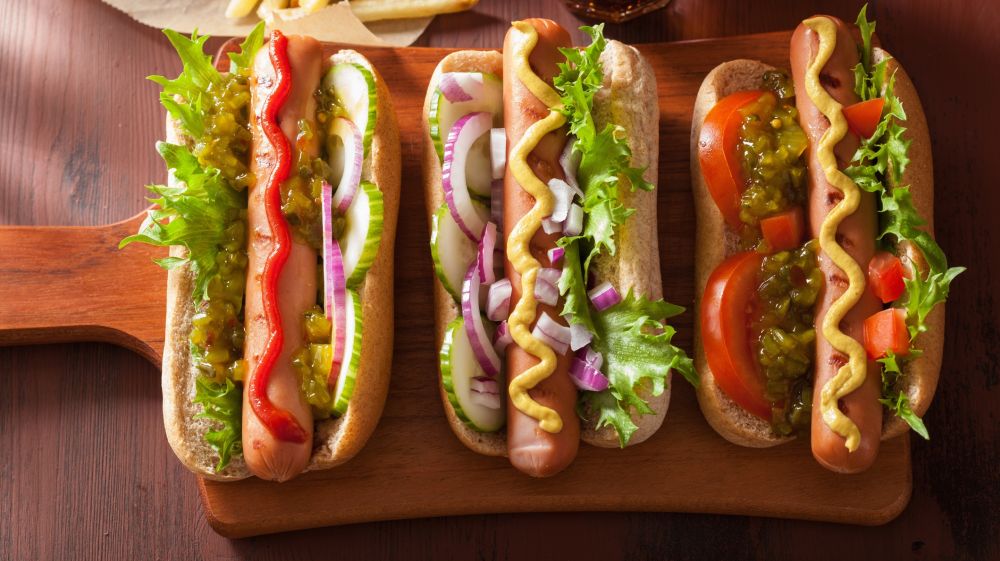 The Completo (Spanish for “complete” or “total”) is a hot dog variation eaten in Chile. After seeing it at practically every street corner, we knew we had to try it. It’s a huge hot dog (bigger than American ones) with all kinds of trimmings; mayonnaise, tomatoes, onions, pickles, sauerkraut, etc. While this is one of the most popular Chilean foods, an equally popular variation is the Italiano. This is the same hotdog but with fewer trimmings – avocado, tomatoes, and mayonnaise.  We were tempted by this variation and tried it at the farmers market.

While it was surprising to have a hot dog with mayonnaise, it was actually quite delicious. The hot dog itself was tasty, the bread lightly toasted and the tomatoes and avocado were fresh. It’s not surprising that it is such a popular Chilean food.

You will find pebre on any respectable restaurant table. It looks like salsa you would typically find at a Mexican restaurant in the U.S., but it tastes nothing like it. Pebre is a seasoning made with tomatoes at the base and topped off with chopped onions, chili, chives, garlic, coriander, oil, and vinegar. It is usually served in a little clay dish and has a nice spicy bite.  This sauce is typically served with warm bread called pan amasado. We tried several versions and the recipe and ingredients change regularly based on the chef and region. Below are some ways we tried this popular Chilean food.

Authentic Food Quest Recipe: Pebre is a delicious sauce that goes on almost everything. To try it for yourself and make pebre at home, check out our simple pebre recipe plus video and add something new to your dinner table in under 15 minutes.

A favorite snack food in Chile, these baked pies or empanadas are available pretty much everywhere. In Chile, the most traditional empanada filling is called pino. Pino is a mixture of minced meat, onions, raisins, black olives and hard-boiled eggs. Having enjoyed discovering Argentina through empanadas, we were quite eager to experience the Chilean version. The empanadas in the two countries are completely different. The most obvious difference is the size. In Chile the empanadas are huge. Almost double the size you find in Argentina. The second difference is the shape. In Argentina, the empanadas are half-moon shaped, while in Chile they are squared off. In general, you’ll find empanadas typically cooked al horno, which means baked in a wood-burning oven, or deep fried.

We tried several empanadas in different cities. We enjoyed the traditional pino versions which we had cooked al horno. Our absolute favorite traditional Chilean empanadas were the seafood or mariscos empanadas which are typically fried. Also quite enjoyable are the vegetarian or verdura versions as well. All in all, don’t expect them to be anything like the ones you would find in Argentina, but they are deserving in their own right.

Porotos Granados is a traditional Summer dish made when the ingredients are fresh and in season. The main ingredients are beans, mashed corn, onions, pumpkin, garlic, tomatoes, and basil. It is a difficult to find and time consuming Chilean food to make as the beans need to be soaked overnight. We had the opportunity to have it with our Airbnb host in Talca (South of Santiago) who made it especially for us.  This traditional Chilean food is a thick and delicious stew that we really enjoyed. Everything was fresh and bursting with flavors.

We were surprised as it was counter-intuitive to eat a hot stew on a hot Summer day. Regardless, if you find yourself in Chile during the Summer, go for the beans as that is when they are in season. You will not regret it.

Pastel de Choclo and Humitas are both corn based dishes. We saw these Chilean dishes all over in Santiago and especially at the farmers’ markets. While Claire and I are not huge fans of corn, we decided to try the Pastel de Choclo and not the Humitas. Pastel de Choclo is like a corn pie made with sweet corn or choclo, the Quechua word for “tender corn” or new corn of the season. The filling or stuffing used is called pino (like the one in empanadas).  This dish has garlic, onion, minced meat, hard-boiled eggs, and olives. We had a version that also included boiled chicken as well.

Churrasco and Chacarero are popular Chilean steak sandwiches that are served all day long. These sandwiches come with the same base ingredients. There is a thin slice of sirloin steak called churrasco cooked a la plancha and two slices of bread called pan amasado.

The Churrasco sandwich comes in different toppings. You will find options with avocados (con palta), with tomatoes (con tomatoes),  or completo which means with everything including tomatoes, avocado, and mayonnaise. On the other hand, the Chacarero comes with green beans, tomatoes, and aji verde or green peppers. Sopaipillas are simple flat breads that are fried. They are made from a mixture of pumpkins, butter, and flour, flattened into circles. These fritters are a popular street food and can be found all over the country. On your travels to the best places to visit in Chile, get this versatile snack and eat it sweet or savory.  The most common way we saw these pumpkin fritters eaten was savory. Most often, sopaipillas are eaten towards the end of the day and topped with either pebre or mustard and ketchup.

After trying the sopaipillas with pebre we immediately fell in love with them. The pumpkin flour is filling and has a unique taste. Together with the pebre, this perfect pair must be experienced.
Sopaipilla plate con pebre

Although we tried lomo at a parilla (BBQ restaurant) in Talca, we refrained from trying the lomo a la pobre for its high calories and poor nutritious content. It is very similar to the Chivito that we enjoyed in Uruguay. Potatoes in Chile, on the other hand, are delicious and tasty. Even when they are fried, they don’t feel as heavy, as they can sometimes be. ed meat in Chile is flavorful and sourced locally. All in all, the lomo a la pobre is not a bad option if you want to try one of the most popular Chilean dishes.
Lomo a la parilla 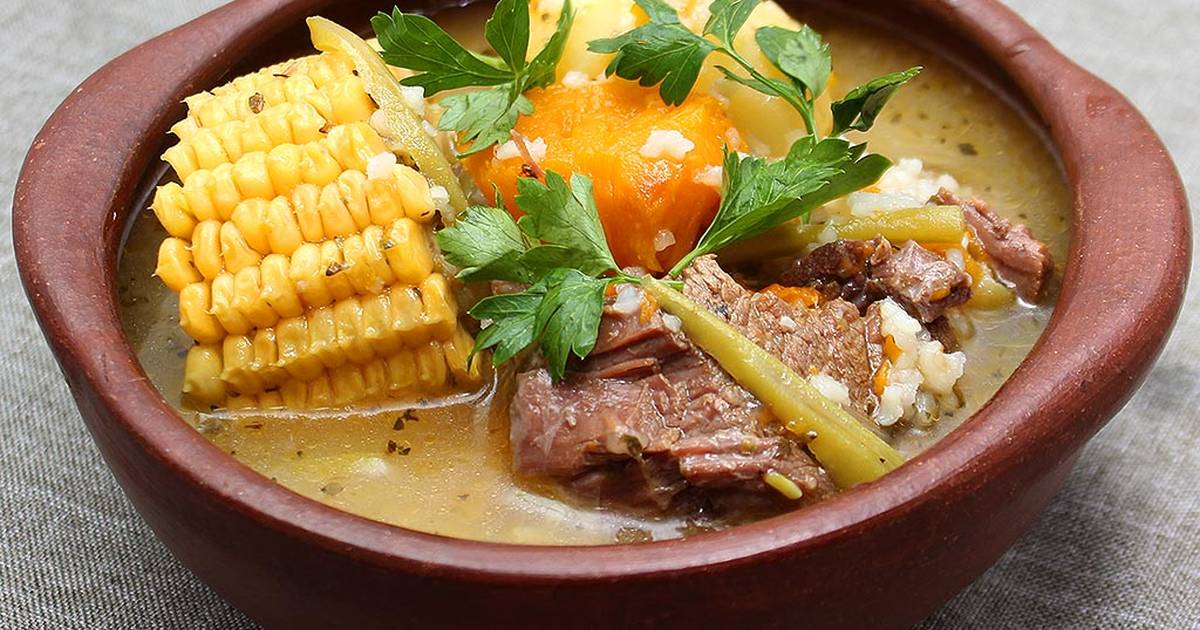 Cazuelas are basically soups or stews. Think of it as home-cooked nourishing, inexpensive, everyday comfort food. Cazuelas or stews are part of Chile’s national and traditional cuisine. These simple Chilean dishes come in many variations. The beef, pork, lamb or chicken (preferably with bone and meat) is simmered in water or broth with garlic, onions, oregano, paprika. When tender, seasonal vegetables are added. This includes potatoes, corn on the cob, pumpkins, onions and other vegetables.

The seafood or mariscos cazuelas are just as simple. Made with an assortment of seafood such as clams, shrimps, oysters and then cooked with seasonal vegetables. Cazuela vacuno (Beef stew) We tried the beef (vacuno) and seafood (marisco) cazuelas and enjoyed their tasty flavors.  The best was was the simplicity of of these Chilean dishes. Made with just meat, poultry or fish and cooked with fresh vegetables  the resulting soups are fresh and delightful  rich.

Be aware that you may not find always cazuelas at upscale restaurants. However,  you will find these stews on every menu at corner restaurants or cafes. The cazuelas are a “sure bet”, try them and you will not be disappointed.

10) Chorillana – One of the Most Popular Chilean Dishes

This is a popular Chilean food and it consists of a large plate of sliced beef with french fries covered with either scrambled or fried eggs and fried onions. It is a typical dish from Valparaiso, and many say “it is not to be missed.” Not fancy or exotic, this Chilean dish is typically served with beers. Do note the servings are huge and it is meant to be shared

Honestly, this is one of the popular Chilean food that did not tempt us much. Looking at this huge plate (mess) of fries topped eggs and onions was not appetizing. There was nothing particularly healthy about it and the high calories were off-putting. While we are quite fond of all of these ingredients separately; fries, onions, and eggs, we didn’t have “the stomach courage” to try them together.

In the comments below, please tell us what Chilean dish intrigued you the most.